Keep These Poisons Away From Your Kids

For such a long time, I have been on a campaign to educate people about the cleaning products and in them. I’m really excited to see the media awareness placed recently on laundry detergents pods. These laundry and dishwashing detergent pods are small squares that you dumped into the washing machine or into the dishwasher. They are brightly colored in plastic coating and to a child, they look like candy. 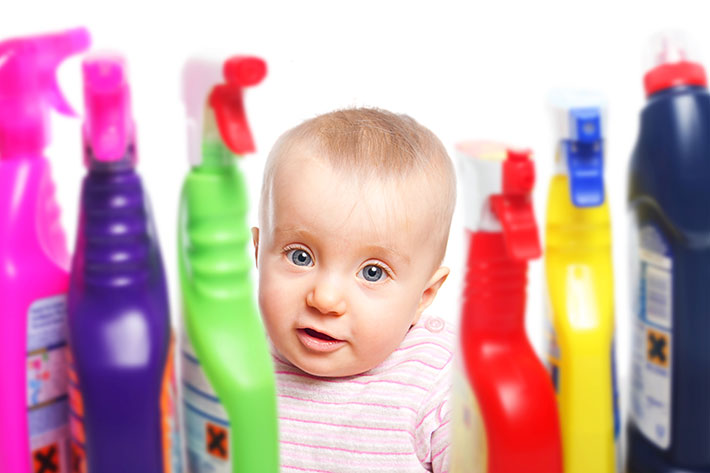 The good news is that the Center for Disease Control reported a decrease over the past several years in accidental poisonings for children eating household products overall. The bad news is that they have seen significant increase in accidents related to these pods. As a matter of fact, in a period of about a year, there were 17,230 children under the age of six. That’s 17,230 kids under the age of six years old that were accidentally poisoned by ingesting the packets. That equates to one child every hour between March 2012 and April 2013. One child every single hour ingesting toxic laundry detergent. This is a huge problem.

In 2012, New York Senator Chuck Schumer actually called the Consumer Product Safety Commission (CPSC) to make manufacturers put the pods in child-proof packaging. That year, companies such as Procter & Gamble made changes to their packaging by putting double locks in it. In 2013, the CPSC also warned parents about the dangers. Nowadays, news media is picking it up and the issue coming into the mainstream media.

Again, I think we need to have a consumer outcry in order to push these companies to create a better and safer packaging. I also think that responsibility lies with the parents and people managing the household. Any type of cleaning product should be locked away if you have a child under a certain age. Parents should be aware of all types of laundry detergent and cleaning chemicals. Keep cleaning chemicals locked away and out of reach of children.

The American Cleaning Institute launched a safety campaign in 2013 to help educate parents understand the dangers of these packets and the potential hazards if a child eats the detergent and ingests it. They can go into respiratory distress and GI distress such as violent vomiting. Also, if the product touches their eye or accidentally comes in contact with the eye, exposure can cause very uncomfortable and severe irritation and/or even a temporary loss of vision.

So I encourage everyone to look around your house. If you have these pods, keep them locked up or at least out of reach. Put them on a high shelf so that the children don’t think that they are candy and you don’t have one of this terrible mishaps in your home.

One more thing... if you haven't heard, our Black Friday Sale has been EXTENDED!

Take advantage of BIG savings before it's too late!